Home RecipesCabbage Noodles and Other Ways Cabbage Can Rock Your Meals

Ah cabbage. The oft over-looked leafy green thanks to its flashier counterparts (I’m talking about you kale and spinach). Known for its tough exterior and flatulent properties, cabbage is usually typecast to the role of coleslaw without consideration that it might actually have the potential for deeper roles.

As a self-described high-volume eater (aka: woman who who feels jipped when something only take three or four bites to complete, preferring instead to feel like every meal is a feast), I’m always on a mission to discover ways that I can eat a lot of food without incurring a lot of calories. It’s no easy task my friends, but the recipes below will reveal that cabbage has come to the rescue.

While the aforementioned kale and spinach are the more well known nutrition super heroes, as it turns out, cabbage is no different. In fact, it falls into the same cruciferous category as kale, collard greens, arugula, cauliflower, and broccoli. Cabbage is full of vitamins C and K, magnesium, and cancer-fighting antioxidants. And while its leaves might rival the pleather seats in your grandma’s old Ford, cabbage’s fiber content makes many of its vegetable brothers and sisters look like bowel-moving lightweights.

So don’t underestimate the cabbage.

Now onto my recipes.

I am no stranger to pasta substitutes. Spiraled sweet potatoes, julienned zucchini, Miracle Noodles; I’ve done them all. And while all serve as fantastic accompaniments to sauces, I was intrigued when I stumbled upon the suggestion that cabbage can also be used as a pasta substitute.

If you prefer angel hair pasta, sweet potatoes or zucchini will be your best bet since the density of their flesh is easiest to form into spaghetti-like shape using spiralizers and peelers. However, if you are more daring and open to a thicker pasta like fettucini, cabbage is going to be your go-to vegetable. That’s because it’s super easy to slice into ½” thick ribbons and maintains its shape after cooking. It even shares pasta’s slimy-like exterior (I tried to find a better adjective than “slimy,” but “clammy” or “mucous-y” really weren’t much better), making it a great option for wilder pasta dishes like lasagna.

The best part? You can make a lot of it without cashing out your macro bank for the day. Plus it’s super easy to make. Check it out:

Fill a pot with water, throw in the bouillon cubes (if you prefer, you can skip the water and bouillon all together and just use chicken or beef broth instead), and place on the stove set to high. How much water and the number of bouillon cubes varies based on how much cabbage you plan to cook, so use your best judgment (you want enough liquid to cover the cabbage). This is a pretty hard recipe to screw up. In fact, if you can’t complete this recipe successfully, you probably should not be in the kitchen in the first place.

Anyway, while you’re waiting for the pot to boil (don’t watch the pot – that makes it take even longer!), slice your cabbage leaves into ½” thick ribbons.

Cabbage ribbons prior to cooking.

Once the bouillon water is boiling, throw the cabbage ribbons in. Boil for approximately 3-6 minutes, depending on how al dente you like your noodles. Once done, drain and sprinkle with salt and pepper to taste (this is optional; the bouillon alone should provide a hint of flavor that won’t overwhelm the rest of the meal).

Serve under whatever meat/cheese/veggie sauce you prefer.

For this photographic example, my cabbage noodles are topped with chicken stroganoff.

If I didn’t already have you with cabbage noodles, then cabbage steaks might make you rethink your unrelenting commitment to kale and lettuce. This is my favorite side dish as of late; seriously, it tastes so good I feel like I’m having a cheat day. And like the noodles, it’s super easy to make even for the culinary challenged among us. Give it a try:

Slice the bottom off your cabbage head so it sits flat on the cutting board. Now cut ½” – 1” thick slices from the head (male readers are now cringing, sorry guys). The results should look similar to roundish shaped steaks.

Spray the front and back of each cabbage steak with the non-stick spray (you can also brush with your favorite oil if you prefer). Press one clove of garlic on each steak, gently massaging the garlic over the entire surface (while I haven’t tried this, you can probably use garlic powder if fresh garlic is not readily on hand). Sprinkle with salt and pepper. The garlic, salt, and pepper need only be on one side of the steak.

Place cabbage steaks on a non-stick cookie sheet or baking stone and place in the oven. Bake for 20 minutes, remove and flip the steaks, and bake for another 20 minutes.

Maybe next time I should use a bigger spatula to flip the steaks.

As you can see by my picture, flipping the cabbage over after 20 minutes resulted in a bit of a food presentation nightmare. In fact, I hesitated to show you this picture for fear you would judge my cabbage. But I assure you, this tastes sooooooo good (especially the brown parts) and perhaps you’ll have better luck at flipping than I did.

Okay, so I already mentioned that cabbage finds itself resigned to the exclusive role of coleslaw, but this recipe is so good I still had to share it. Plus it makes a great dish to bring to family dinners or pot lucks and takes only minutes to make.

Mix the yogurt, mayo, vinegar, and sweetener together and set aside. Slice your cabbage into match-like strips (or you can just buy pre-cut cabbage slaw). Place cut cabbage into yogurt mixture, toss, and you’re done.

Cabbage slaw. Yes, those are hot dogs. Don’t judge me.

See? Super simple. By the way, the amount of cabbage you use is up to you. I prefer heavy sauce on pretty much everything I eat (I love me some ketchup!), so I use only 100-150g of cabbage with this recipe. I guess my version is really more like slaw sauce with a little bit of cabbage mixed in.

Did this revelation about cabbage blow your mind? Follow Get Fit Go Figure on Facebook where you will find even more recipes, workout strategies, and other daily tips you might find useful on the journey towards healthy living.

As if her glamorous life isn’t enough, Jenny is also an NGA figure pro and contributor to the GF2 blog. Because she likes Heather and wants her sanity to remain in tact, she also acts as an administrator to the GF2 Fitness & Contest Prep Forum on Facebook.

Jenny is currently pursing her Precision Nutrition Level I Certification, which will allow her the opportunity to help people everywhere realize that being fit doesn’t mean a diet made exclusively of chicken breast and salads. In the meantime, you can find her in the gym or else hiding from her children in the bathroom. 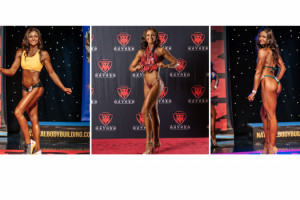 These posts may take a minute to load! Thank you[...] 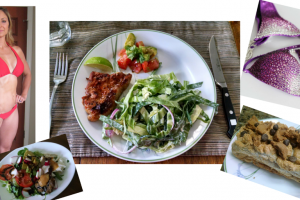 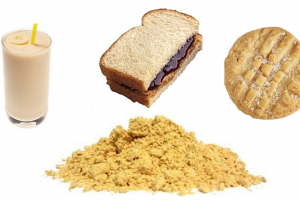 I just discovered peanut butter powder and I am over[...]