Tracy George – Given 99.5% chance of death to marathons

Home Featured WomanTracy George – Given 99.5% chance of death to marathons

Tracy George – Given 99.5% chance of death to marathons

I’m 36, married to Eric, with a 3 month old son, Charlie, who was born in March and work as a Compliance Specialist at Stearns Bank

Exercising and physical activity comes easy for me now because there once was a time when it wasn’t even possible. When I was 15, I was diagnosed with Leukemia. During my treatment, I contracted viral pneumonia. With no white blood cells to fight off the infection because of my chemotherapy, this caused several complications and sent me to the ICU. I was put in a medicated coma and hooked up to every machine imaginable to keep me alive. Feeding tubes, breathing tubes, heart monitors, you name it. My organs were shutting down. According to my mom, everything but my heart and brain wasn’t working. I became jaundiced, my body began to swell, my lungs continued to fill with fluid. And to top it off, an air pocket developed in my chest cavity, keeping the doctors from doing anything to help. Doing so could cause the air pocket to shift, blowing out my lungs and killing me within seconds. The doctors gave my family a .05% chance of survival. Yes, .05. That means they were 99.5% sure I wasn’t going home.

Miraculously, I was saved. I was in that coma for a month. I dropped 60 pounds of muscle and weight in just 3 weeks. Because of that, when I woke up, I couldn’t move from the neck down. I had no muscle tissue to do it. I was essentially paralyzed, only able to move my head left and right. I had to relearn to walk, talk and even breathe on my own all over again. Months of physical and occupational therapy was needed to get enough strength back in my body just to function on my own. When leaving the hospital, I was still in a wheelchair with no use of my legs, where I remained for over 2 more months, and didn’t even have enough strength in my fingers to open a can of soda.

When in the hospital, my ICU room overlooked a bluff over 35E where I could see a man running up and down the stairs every day. Laying in my bed, not able to move, I would watch him run, just wishing I could get up and run along next to him. I remember feeling of desperation, not being able to do anything about it at the time. That feeling is what gives me a sense of pride whenever I accomplish any fitness related goal. It allows me to feel proud of myself and not take for granted what I am now able to do.

The pneumonia did have significant damage though, and I now have permanent scar tissue on the lower half of my lungs, cutting my lung capacity roughly in half. Any cardio activity I do, I do it with ½ the lung capacity of everyone else. Knowing that challenges me to try just a bit harder whenever I run, Zumba or skate, and also keeps me from feeling down about my performance or thinking I wasn’t good enough. I am proud that I’m physically able to even try.

Doing What Was Once Impossible

Each year I complete in the North Shore Inline Marathon, which is a 26.2 mile inline skate from Two Harbors to Duluth along the North Shore scenic highway. Training skate sessions for the inline are usually anywhere from 10-24 miles a few times per week. It’s really fun every year, but always a challenge considering the hilly nature of Duluth.

Also, I started running short distances about 5 years ago. But because of my lungs, hated doing it because it was so painful and I couldn’t run for very long before needing to walk and catch my breath. But with the help of a friend of mine who runs a LOT, she introduced me to the Galloway method of running, which is training yourself to run for a set length of time, then walk for a set length of time from the beginning of your run. Training that way, when you walk, your legs aren’t too fatigued to pick up the run again. Running this way taught me it’s OK to walk during your run! I’ve been running this way ever since, and it allowed me to run longer distances. I’ve learned I actually like the longer distance races better!

I completed my first 10k at the Women Rock in 2013, then ran the Earth Day Half Marathon Relay (just over 7 miles) April 2014. I was most proud when I finished the Twin Cities 10 Mile October 2014. Not only because it was the longest distance I had ever run, but I was also 4 months pregnant.

When I was approaching the finish line, I heard the PA announcer say, “Welcome to the Finish Line!”, and hearing that I filled with pride and cried a little bit, knowing I was finishing something I never thought I would be able to do.

I’m hoping to run the 10 Mile again this year, that has been my favorite running event so far.

Because of the combination of the chemotherapy and my age, I was told by the doctors I wouldn’t be able to have children. That’s something I’ve always just accepted since I was a teenager. I’ve always been ok with being the favorite aunt. Well, I discovered my survival through Leukemia wouldn’t be the only miracle I would experience in my life. In August 2014, I found out I was pregnant. Something I was told wouldn’t be possible was now a reality. 20 years after the first miracle, I was now about to experience a 2nd, much happier one.

I had never put any thought into being a mother, because I wasn’t supposed to be one. At first I was I was completely overwhelmed. Imagining being a mother for the first time while being pregnant was a lot to handle. I had lots of questions and fears. Between the chances and risks of abnormalities for my baby and the normal “can I be a Mother?” moments, I was nervous as my pregnancy was monitored closely  to make sure everything was going smoothly.  But, I took the opportunity to look beyond that and enjoy every minute of being pregnant. I continued to exercise, improved my nutrition and really enjoyed something I never thought I would experience. I loved it. Everything was made worth it when Charlie was born on March 11, 2015. I felt the strongest feeling of happiness, love and pure joy I’ve ever experienced the minute he was laid on my chest. My son. My miracle son.

My brother said one of my favorite things when Charlie was born:

“Tell Tracy she can’t do something. She will prove you wrong.”

I’ve always considered myself fairly active. As a kid, I bowled, played softball, basketball and tried soccer. I was on the high school basketball team as a freshman (before getting sick), which is where I learned the life of lifting at the gym. Throughout college and after I would always go to the gym, lift weights, do some cardio, or group fitness classes. That’s where I found Zumba, and eventually my fitness happy place.

I’ll be honest, I was completely afraid to try Zumba at first. I would see women going to class, looking like they knew what they were doing, in their cute Zumba outfits, and felt like I would stick out or wouldn’t know what I was doing. I actually backed out of going to class several times before actually attending! I struggled through the first class, but still loved it and kept going back. Largely because 1) I love to dance and 2) the instructor, Caryn. She’s full of energy and happiness, which automatically makes you have a good time, all while getting a sweet, sweaty, calorie burn. It kept me coming back. So when Caryn left the gym and opened her own studio, Caryn’s Studio, I followed without hesitation.

I also run and inline skate, but outside of that, Caryn’s Studio is where I do all my workouts. I get everything I need for cardio and strength training, and it’s a blast! Not only do Caryn and Brittani (her daughter) make the classes fun, they make sure to keep you safe from injury. Both have proper education, certifications and licensing and I know when I ask them anything, from fitness to nutrition, I’m getting the right answers. They helped me modify my workouts when I was pregnant, which kept me working out up until the day I went into labor.

Bigger than that though, the environment at Caryn’s keeps me happy. It’s my happy place and I love being there. I have met so many wonderful women there that are now my good friends. Not only do I go there to workout, I get my social interaction with my friends, who I consider my Zumba family.

For me, it’s not about being skinny, it’s about being fit. I don’t exercise to be skinny or thin, that’s not my goal, which is what I thought it needed to be when I was younger. It’s about being fit and strong, that’s more important to me. I don’t need or want to be a size 0. I want to feel healthy.

But, since the birth of my son in March, my latest struggle has been having confidence in how I look because of my added pregnancy weight. Since I exercised throughout my pregnancy, I felt as though my body would be back to the way it was before fairly easily, or that I would see the weight coming off without much effort. Part of that misconception came from reading and hearing others say during my pregnancy “oh, your body will bounce right back because you’ve been exercising” and “you won’t have any trouble losing the weight, you exercise enough”. When I saw that not happening, I started to get frustrated.

What I’m learning now and working on to get through it is improving my nutrition and what I eat. I have always struggled with eating right, but was able to workout more to try and offset weight gain. Now with the baby, I’m not able to spend 2 ½ hours working out 5-6 times/week. I’m working on continuing the nutrition habits I had while pregnant, eating more fruits, veggies and whole grains, but skipping the donuts.  I’m also trying to add more protein earlier in the day and around my workouts, and balancing protein, carbs and fat throughout the day. The toughest part for me is limiting sugar, because I LOVE sweets. But I’m working on it by trying to not get hungry and making healthier food choices.

It’s just a start, but I consider myself a work in progress at this point. 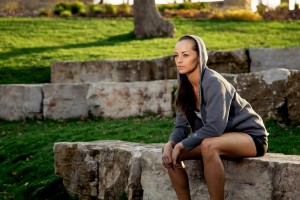 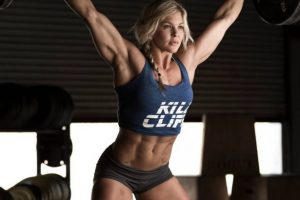 4 Things To Know When Going Competitive As A Woman

Going Competitive As A Female When looking for advice or[...] 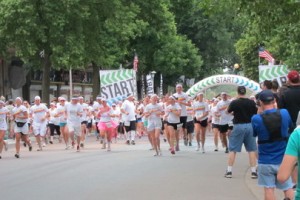 Alissa – Running for My Life

Running for My Life By Alissa Ever since I was[...]